Welcome to the Ultimate Guide to the Potoo Bird 2023. The Potoo bird is a unique and fascinating species of bird, native to much of Central and South America. With its peculiar and often comical appearance, the Potoo bird is a treat to observe in its natural environment. With its captivating eyes and remarkable ability to blend in with its surroundings, the Potoo bird has been the focus of many encounters and stories for centuries.

This guide is designed to provide comprehensive information about the Potoo bird, from its habitat and behavior to its diet and conservation status. Whether you’re a bird enthusiast, a wildlife biologist, or just curious about the Potoo Bird, this guide aims to provide all the key information that you need to know about this incredible species.

We will explore the various characteristics and behaviors of the Potoo, including its diet and preferred habitat, as well as its geographical range and conservation status.

The potoo bird is a medium-sized bird with a unique appearance, easily distinguishable from other birds. They range in size from 12 to 24 inches in length, and have a long, slender, pointed bill. They have a brownish-gray coloring with white bars on the wings and tail, and can often be found perching on a tree trunk or branch.

Potoo birds are nocturnal creatures and are most active at night, making them difficult to spot during the day. They don’t migrate and usually remain in the same area all year round. They are also primarily solitary, though small groups of two or three may form.

The Potoo bird is mostly found in the tropics, from southern Mexico to northern Argentina, and from the Caribbean to the Amazon Basin. They prefer to inhabit wooded savannas, swamps, and rainforests. They are also commonly found in mangrove forests, as well as in and around sugar-cane and coffee plantations.

The Potoo bird has adapted to living in such a wide range of habitats and can be found in almost any type of tree. They are especially drawn to areas near water and are highly territorial, defending their area against other Potoo birds. 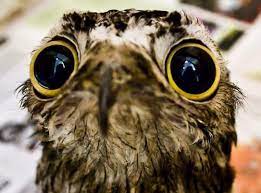 Potoo birds have a very specific diet, as they mainly feed on large moths and beetles, which they catch in midair. They also feed on small bats, lizards, and other small vertebrates. Potoos generally don’t hunt during the day, but rather wait until the cover of darkness to swoop out and snag their prey.

They are very adept at locating the moths and beetles they feed on, and they use their acute hearing to hone in on their prey. Potoos can also go for long periods of time without eating, as they have adapted to survive on sparse resources.

Potoo birds are fascinating creatures, and their breeding and nesting patterns are a source of fascination for birders and scientists alike. Potoo birds generally breed in the dry season after the rainy season, and they usually form a monogamous pair bond. Once they have chosen a partner, they begin a courtship dance and work together to build a nest, usually in the form of a shallow depression in a tree.

The female will lay two eggs, which are incubated by both parents. The chicks hatch after about two weeks and are able to leave the nest and fly after another two weeks. Both parents will take turns feeding the chicks and protecting them from predators until they are able to survive on their own.

The Potoo bird is a vulnerable species, with a decreasing global population due to several threats. Habitat destruction, hunting and trapping, and the pet trade are all causes of the decline of the species.

The destruction of mangrove, tropical dry, and humid forests has caused a decrease in the availability of suitable nesting sites and has reduced the amount of prey that the bird can find. Hunting and trapping, either for food or for the pet trade, are also to blame for the decrease in their population. Conservation efforts must be taken to ensure that these incredible birds are able to thrive and survive for generations to come.

In conclusion, the Potoo bird is a fascinating and unique creature. Their strange and remarkable behaviors, mysterious calls, and distinctive features make them a fascinating subject of study. With the right environment and habitat, these birds can be successful in captivity and can even breed successfully. With a little bit of knowledge and patience, anyone can appreciate the beauty of the Potoo bird.

Previous article
What Do Crows Eat? A Complete Guide 2023
Next article
Where Do Hummingbirds Go In The Winter? A Guide

To be updated with all the latest news, offers and special announcements.